I like dressing for the season as much as the next gal, but I don't like spending a lot money on costume jewelry that I'll only wear one month out of the year. I've accumulated a small assortment of Christmas jewelry over the years, but it was all either given to me, purchased the week after Christmas at a deep discount, or handmade.
My favorite piece would have to be the antique style clothespin pin that my now all grown up daughter made for me back when she was in daycare. 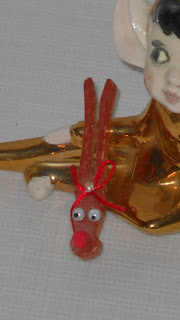 I've had to reglue his googly eyes a few times over the years, but he's still in one piece and he always brings compliments and makes me smile.
One of my favorite post Christmas deep discount purchases would be my Berenstain bear pin. Who doesn't like a bear all dressed up for the holidays? 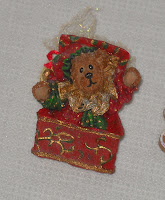 There's the angel pins and bracelet. I love angels, don't you? 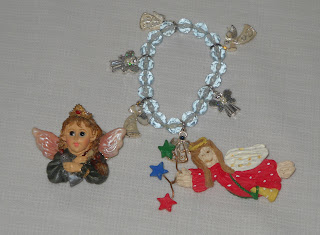 I'll let you in on a secret. I think the one on the left is actually a tooth fairy, but she has wings and a crown that could be considered a halo, so I wear her as a Christmas angel.
But here are the things I most wanted to share with you. These are some of the things I've made over the years. 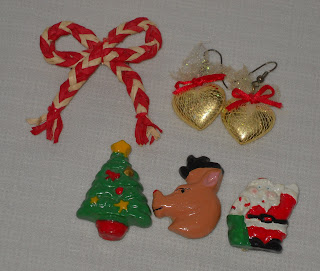 A braided paper bow sold as a package decoration just needed a pin back hot glued to it and I have a cute pin that really pops on a black sweater. That's how I wore it today.
Those gold plastic hearts encased in glittery tulle and topped with a skinny red satin ribbon bow are ornaments for a miniature Christmas tree, they just needed fish hook earring wires and ta-da! Instant Christmas earrings. They're as light as a feather and super festive looking.
Those three items, the tree, Rudolph and Santa are button covers. Remember them? I'm not sure what they were sold as, but I just glued button cover findings to the backs. Is it just me, or does that reindeer look angry?
I had a bracelet on a stretchy cord that I bought at one of those "trading companies" that are all over the place in our area. It had a mix of beads and charms. I went to put it on one day in December last year when the cord popped and  beads and charms went everywhere. I gathered up all the pieces and the next day sat down to restring it, when I had an idea. I took a short piece of chain and some jump rings and made a pair of earrings instead. 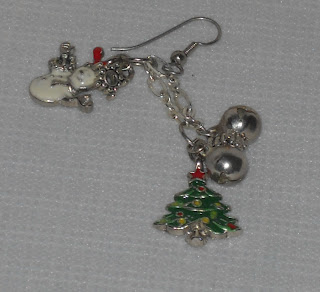 I kind of stretched this one out so you could see what  I did. I added a snowman and a charm on a jump ring at the top of the chain, then two tiny bells and a tree charm at the end of the chain. 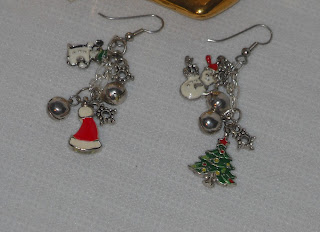 Here's the pair together. I kind of like the quirkiness of them that that aren't exactly the same. They each have a snowman at the top. But they aren't identical, and a Santa hat hangs at the end of one, with a tree on the other.
So next time you're looking at Christmas decorations in a store, consider what you could use to make jewelry with. Do you have Christmas jewelry that you wear each December?
I hope you're having a good week!
Thanks for stopping by :)
Posted by Tammy at 11:12 PM